Richard Weikart created quite a stir after he published his book „From Darwin to Hitler“ where he argued that the Darwinian concept of natural selection played an important role in the national socialist ideology.

In the raging north American culture war, this gave rise to countless heated debates, with people saying at one extreme that Nazism was a natural consequence of Darwin’s ideas and other people asserting that Nazis rejected Darwinism and were heatens or even Christians.

I believe that the truth lies somewhere between these two extremes, but this will be the subject of a future article.

The (alleged) Darwinian origins of the Holocaust gives quite a few conservative Evangelicals the feeling that they’re in the right camp, and that the godless liberals they’re opposing will bring the word to oblivion.

However, they very seldom take a closer look at the role the founder of Protestantism played in the developement of antisemitism.

At the time of Luther, the Roman Catholic Church had really an abusive theology in many respects, and Luther thought he had to work very hard to earn his salvation.

I believe that his experience of unconditional grace and divine love was a genuine one, but this also led him to believe in the doctrine of predetermination (Vorherbestimmung), that God chose certain people to believe in Him and get saved while predetermining the others to head to hell.

Luther tried to convert the Jews and became increasingly frustrated all his efforts were apparently vain.

This leads to a real hatred which is summed up in his infamous book „On the Jews and their Lies.“

Here I’ve copied the good English summary of the seven laws he wanted to introduce in Germany and perhaps even elsewhere: 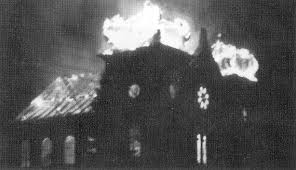 In 1923 Hitler praised Luther for his ideas, and called him the greatest German mind, who “saw the Jew as we today are starting to see him.”

Such writings reveals us quite a bit about Luther’s heart. It is impossible to explain this away by just saying he was a „man of his time“. The Anabaptist utterly rejected violence, and as they underwent gruesome persecutions they most often reacted with love. And more than one thousand years ago, the Apostle Paul was also frustrated not to have converted his fellow Jews  but instead of cursing them, he prayed to God he would be damned so that they would be saved!

Can we conclude that Luther wasn’t probably a man of God, that his experiences and faith were fake?

I don’t think so. It is true that the main aspect of the reformation „Sola Scriptura“ doesn’t seem to be coherent. God only speaks authoratively through Scripture, except the day the early Church decided which books belong to the Canon and which not.
The doctrine of many progressive Roman Catholics that God speaks to us through the tradition of believers over the centuries, and the Bible itself is such a tradition, is at the very least self-consistent.

But I do think that during this period in history, a great part of the Church had an abusive theology leading people to earn or even buy their salvation. I believe that after his desperate realization he was not up to the task, Luther really experienced the grace and love of God.

But he freely chose to let hatred and darkness dominate other parts of his heart. His teaching that God predetermined certain persons to be hell-bound was certainly one area where his thoughts were completely darkened.

But this raises a problem: why does God allow people to get things right about him while also believing blasphemous non-senses?

I often encounter the same problem in the Bible, with the book of the Psalms where the goodness and bounty of God are praised in a wonderful way, but where psalmists also prayed God to crush the head of their enemy’s children against rocks.

And I see the same problem in my life: sometimes I am overwhelmed by the love of God which I try to pour on my fellow humans, but I am also still driven by my selfishness and deep-seated fears.

I believe that God took an enormous risk by granting us freedom, and that a total revelation of Himself would considerably reduce this liberty.

I do believe that God is completely  able to compensate for the evil caused by this in the world to come.

20 thoughts on “On Luther, Hitler and Religious Confusion”