A very interesting, kind and respectful atheist fellow calling “Xon-Xoff” (by the way where does this name come from? 🙂  ) wrote me an interesting comment.

“It is nice to engage a believer that has a more rational outlook, which I gather from your blog here on this page, and some of your comments on “Debunking Christianity.”

If you recall a few days ago, I am the “turbopro10″ that upbraided you for your use of the word atheist inappropriately–in my humble opinion at least.

Your comment “Actually, I reject the idea that the Bible should be our foundation for learning how God is and believe we should base our theology on the concept that God has to be perfect in order for Him to be God[,]” is interesting.

Now, before I parse that sentence, I must understand what you mean by those very abstruse and somewhat loaded words: ‘perfect,’ and ‘God.’

What does it mean to be perfect?
What is a God?

Also, I see that you favour Randal Rauser, and I should like to discuss one of his books, “Faith Lacking Understanding,” which I promised to read a month ago. As an agnostic atheist–I am not too enthusiastic about labelling myself–it’s hard sometimes to read an apologist engaged in mental gymnastics as s/he tries to get around an obvious contradiction or discrepancy.

For instance, the Trinity, which Mr Rauser takes up firstly in the above mentioned text. How do we make sense of 1 is 3, and 3 is 1? Well, as he pointed out in the introduction, as a rational mind, one plausible means is to retreat to mystery.

When we retreat to mystery, then almost anything may be possible.

I wish all Christians and atheists interacting with each other were so friendly. He rose very interesting, profound and extremely complex questions.

It is clear that I am not able to come up with definite answers, let alone ones which would convince  every rational person. So everything I am going to write should be understood as a springboard for further reflections.

I view “God” like Anselm of Canterbury as the greatest possible being who can possibly exist. We all believe intuitively that certain things are more beautiful than others, that some persons are more loving than other individuals, that some people are more rational and so on and so forth.

God is the being who maximizes all these properties. Of course this leads to many difficulties such as the problem of reconciling evil with the existence of this perfectly good creator.  I am certainly troubled by that but believe that the problem is greatly diminished by the fact that God will offer eternal life to everyone sincerely desiring Him.

I agree that like every human beings, the progressive Evangelical theologian Randal Rauser sometimes performs mental gymnastic to defend some of his cherished beliefs.

Now there are several things I’d like to say about the problem of the trinity.

First of all I don’t see that as such a great problem. A triangle is made up of three segments but it is also an unity. But it is true that it is a mystery

But it is vitally necessary to make a distinction between logical contradictions and enigmas.

Asserting that God is Love while saying He will condemn people to eternally suffer is as meaningful as stating that John is a married bachelor. 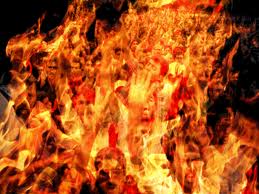 But saying that God tolerates evil during a limited amount of time for reasons we cannot (at least fully) comprehend is not absurd.

Forbidding an appeal of mystery and saying that the existence of unsolved problems for theists show that God does not exist is risky because this could be committing the fallacy of an “Atheism of the Gap”.

Like the reverse fallacy “God of the Gap” perpetrated by ID creationists, it consists of saying that if (according to our current knowledge) a worldview is not able to account for a given set of facts, then this worldview is most likely wrong.

But this raises a very difficult question: how can we decide the threshold of tensions beyond which a worldview has been shown to be utterly implausible?

The honest answer is that I don’t know. Actually I am not sure how one could objectively define the word “likelihood” and “probability” with respect to the truth of theory, as philosopher Elliot Sober pointed out.

I can define the likelihood of having a car accident while driving in one hour to the physician as an objective statistical quantity.

But how could have Newton objectively defined the likelihood of his theory of gravitation as he was gathering his first data?

I tend to be pragmatic about my beliefs. I cannot show (without begging the question) that it is unlikely I am a brain in a vat. Yet I choose to lead my life as if the world around me is real.

Finally, I want to emphasize that I don’t believe that the doctrine of the trinity is essential to Christianity. Actually I am not convinced by it since it only appears in an embryonic form in the latest writings of the New Testament.

The central truth of Christianity is that God was embodied in Jesus of Nazareth and showed us His true face through his life, death and resurrection.

The Holy Ghost can be fairly well understood as being an aspect of God and not a person.

By the way Conservative Evangelicals told me I was “unsaved” due to this belief and that if I don’t believe in the trinity I am heading to (eternal) hell.

26 thoughts on “On divine perfection, mysteries and logical contradictions”