Skip to content
HomeNaked Calvinism: why the difference between single and double predestination does not matter 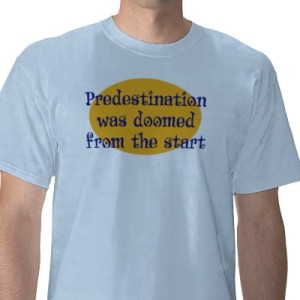 According to the doctrine of double predestination, God actively works to save some people but also to damn others. The first ones will enjoy everlasting bliss in His presence while the others will suffer the eternal flames of hell.

Most Calvinists insist they just believe in single predestination, that is that God just works for saving His elects while abandoning all other people to their well-deserved fate.

In what follows, I will show through an analogy that, given Calvinist presuppositions, the difference between the two kinds of predestination is insignificant.

Let us consider a group of twenty children who are playing football besides the ocean. One girl (I can be very sexist at times)  shot the ball in the wrong direction. The children are so eager to pursue the game that they disobey the order of adults not to swim in this dangerous zone and soon all are in the water. Very quickly they are carried away by a formidable tide. 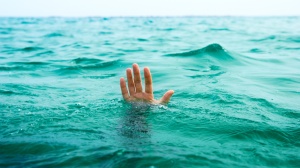 Jerry Gooddeer happened to be there in his boat. He has the possibility to save all kids. Let us now consider two possibilities:

1) Jerry decides to save Mary, Lucy, John and Peter while pushing away all other children so that they cannot escape death.

2) Jerry decides to save Mary, Lucy, John and Peter while not helping the other kids reach his boat, thereby letting them drown.

Why 1) may be worse than 2), there is little doubt that no sensible person would call Jerry a loving man in the last case.

But let us now consider

2′) Jerry decides to save Mary, Lucy, John and Peter while not helping the other kids reach his boat, thereby letting them drown.
Before everything began, Jerry made it certain that the ball would escape to the children and that they would feel the irrestible desire to run and swim after it.

The injustice of being predetermined to hell

Morally and practically speaking, I fail to see any significant difference between 1) and 2′) 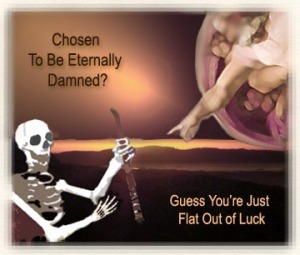 Evangelist Kerrigan Skelly gives us a complementary perspective on that question whereby he quotes John Calvin.

20 thoughts on “Naked Calvinism: why the difference between single and double predestination does not matter”