This is going to be a (relatively) geeky post which I tried to make understandable for lay people.

Given the important role than epistemological assumptions play in debate between theists and atheists, I deemed it necessary to first write a groundwork upon which more interesting discussions (about the existence of God, the historicity of Jesus, miracles, the paranormal…) will lie.

In other posts I explained why I am skeptical about the Bayesian interpretation of probabilities as degrees of belief. I see no need to adjust the intensity of our belief in string theory (which is a subjective feeling) in order to do good science or to avoid irrationality.

Many Bayesians complain that if we don’t consider subjective probabilities, a great number of fields  such as economy, biology, geography or even history would collapse.
This is a strong pragmatic ground for being a Bayesian I hear over and over again.

I don’t think this is warranted for I believe that the incredible successes brought about by probabilistic calculations concern events which are (in principle) repeatable and therefore open to a frequentist interpretation of the related likelihoods.

According to a knowledge-dependent interpretation of frequentism I rely on the probability of an event is its frequency if the known circumstances were to be repeated an infinite number of times.

Let us consider an ideal dice which is thrown in a perfectly random way. Obviously we can only find approximations of this situation in the real world, but a computer can reasonably do the job.

In the following graphics, I plotted the results for five series of trials.

The frequentist probability of the event is defined as

that is the limit of the frequency of “3” when the number of trials becomes close to infinity.

This is a mathematical abstraction which never exists in the real world, but from the 6000-th trial onward the frequency is a very good approximation of the probability which will converge to the probability according to the central limit theorem.

Actually my knowledge-dependent frequentist interpretation allows me to consider the probability of unique events which have not yet occurred.

For example, a Bayesian wrote that “the advantage of this view over the frequency interpretation is that it can deal with cases where there is no relative frequency to draw on: for example, Gigerenzer mentions the first ever heart transplant patient who was given a 70% chance of survival by the surgeon. Under the frequency interpretation that statement made no sense, because there had never actually been any similar operations by then.“ 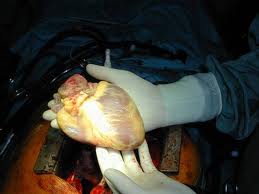 I think there are many confusions going on here.
Let us call K the total knowledge of the physician which might include the different bodily features of the patient, the state of his organs and the hazard of the novel procedure.

The frequentist probability would be defined as the ratio of surviving patients divided by the total number of patients undergoing the operation if the known circumstances underlying K were to be repeated a very great (actually infinite) number of times.

Granted, for many people this does not seem as intuitive as the previous example with the dice.
And it is obvious there existed for the physician no frequency he could have used to directly approximate the probability.
Nevertheless, this frequentist interpretation is by no means absurd.

Another example is the estimation of the probability it is going to rain tomorrow morning as you will wake up.

While the situation you are confronted with might very well be unique in the whole history of mankind, the probability is well defined by the frequency of rain if all the circumstances you know of were to be repeated an extremely high number of times.

Given this extended, knowledge-dependent variant of frequentism, the probabilities of single events are meaningful and many fields considered as Bayesian (such as economical simulations, history or evolutionary biology) could be as well interpreted according to this version of frequentism.

It has a great advantage: it allows us to bypass completely subjective degrees of belief and to focus on an objective concept of probability.

Now, some Bayesians could come up and tell me that it is possible that the frequentist probabilities of the survival of the first heart transplant patient or of the weather does not exist: in other words, if the known circumstances were to be repeated an infinite number of times, the frequency would keep oscillating instead of converging to a fixed value (such as 1/6 for the dice).

This is a fair objection, but such a situation would not only show that the frequentist probability does not exist but that the Bayesian interpretation is meaningless as well.

It seems utterly nonsensical to my mind to say that every rational agent ought to have a degree of belief of (say) 0.45 or 0.87 if the frequency of the event (given all known circumstances) would keep fluctuating between 0.01 and 0.99.
For in this case the event is completely unpredictable and it seems entirely misguided to associate a probability to it.

Another related problem is that in such a situation a degree of belief could be no nothing more than a pure mind state with no relation to the objective world whatsoever.

As professor Jon Williamson wrote:
“Since Bayesian methods for estimating physical probabilities depend on a given prior probability function, and it is precisely the prior that is in question here, this leaves classical (frequentist) estimation methods—in particular confidence interval estimation methods—as the natural candidate for determining physical probabilities. Hence the Bayesian needs the frequentist for calibration.”

But if this frequentist probability does not exist, the Bayesian has absolutely no way to relate his degree of  belief to reality since no prior can be defined and evaluated.

Fortunately, the incredible success of the mathematical treatment of uncertain phenomenons (in biology, evolution, geology, history, economics and politics to name only a few) show that we are justified in believing in the meaningfulness of the probability of the underlying events, even if they might be quite unique.

In this way, I believe that many examples Bayesians use to argue for the indispensability of their subjectivist probabilistic concept ultimately fail because the same cases could have been handled using the frequentist concept I have outlined here.

However this still leaves out an important aspect: what are we to do about theories such as the universal gravitation, string theory or the existence of a multiverse?
It is obvious no frequentist interpretation of their truth can be given.
Does that mean that without Bayesianism we would have no way to evaluate the relative merits of such competing models in these situations?
Fortunately no, but this will be the topic of a future post.
At the moment I would hate to kill the suspense 🙂