RD (a Conservative Christian blogger and apologist) recently released a comment on my blog which made me truly shudder.

IMPORTANT NOTE: I made mistakes concerning the person of RD. and sincerely apologize for this. See my note at the end of the post.

The anti-abortionists who support the killing of abortionists can hardly be called pro-life!

Actually, the issue is not nearly as cut-and-dry as you try to make it out to be. If an individual truly believes that an unborn child is a human being, then if that individual takes action, up to and potentially including the use of deadly force in order to protect the life of the unborn child, and in so doing, the individual uses deadly force to stop the abortionist in question, then there is nothing inconsistent with maintaining such a position and with being pro-life. In fact, it is no different, in principle, from a pro-life person who has to use deadly force to stop someone from killing a newborn or from a pro-life person who uses deadly force to stop a serial killer from murdering a family. In all these cases, the pro-life person—as a last resort—must use deadly force in order to protect human life. And so that person would be entirely consistent in claiming to be pro-life while at the same time having had to use deadly force to protect a third-party from serious bodily harm or death. Now, of course, the person would also be under the obligation to use only as much force as is necessary to stop the threat, and thus lethal force would rarely be justified, but that does not mean that the use of lethal force would be illegitimate in such a case. It just means that its use would be rare. And while this latter fact makes the use of the third-party protection principle difficult to practically justify in the case of abortionists—both due to the fact that the State already knows about abortionists and does nothing, and due to the fact that using less than lethal force is difficult in such cases—the practical reality does nothing to negate that this idea is completely sound in principle.

Finally, let me just note that when you really think about this issue the real inconsistency and incoherence is on the side of the pro-abortionists. After all, the pro-abortionist is someone who must support the following absurd position: if, one minute before birth, someone stops an abortionist from killing the nearly born child, then pro-abortionists consider that person to be a monster and a pro-life “terrorist”; but if that same person stopped some random murderer from killing that child one minute after it was born, then that person would be hailed as a hero and a “child-savior.” In my view, the patent absurdity of holding such a view is evident to anyone with eyes to see it. And yet, for the pro-abortionist, this is, necessarily, the view that he must, in principle, hold.”

I’ve long laughed at people telling me that there are Christian Talibans in America who want to bring about a violent theocracy. Now I realize I no longer can. In what follows, I want to offer my thoughts on his argument.

Killing an abortionist for saving an innocent life

I’m really not a huge fan of the abortion lobby and agree with RD that there is no rational criterion for distinguishing the killing of a “nearly born child” from one who just saw the light of day. I’m in very good company here, since the prominent bio-ethicist Peter Singer tells us that we should be allowed to annihilate disabled children until their 30th day.

But I completely reject the use of violence for preventing any abortion from happening and am utterly horrified by this very idea.

Basically, RD’s reasoning can be summarized as follows:

1) It is always permissible to kill someone who is about to consciously put an end to an innocent human life.

2) Abortionists are consciously putting an end to many innocent human lives.

3) Thus it is allowed to kill abortionists.

There are many things wrong with this line of reasoning.

2) does not hold in many cases, because the large majority of abortionists I know are sincerely convinced that unborn children are not yet persons and that killing them is as morally problematic as throwing away a bunch of outworn chemicals into a wastebasket.

It goes without saying I strongly disagree with that but I don’t view them as moral monsters at all. Most abortion physicians act in good conscience and Jesus reminds us that “If you were blind, you would have no sin“.

1) is outrageously false in many respects.

A consequentialist justification of terrorism

If 1) were to be consistently applied elsewhere, all societies would be plagued by an endless cycle of violence. As a Conservative Evangelical (Correction: RD is a conservative Catholic), RD tends to focus most of his moral indignation on sexual sins such as abortion (and alleged sins such as homosexuality).

But there are lots of other things people do which indirectly cause many innocent persons to pass away.

During the Bush administration, Dick Cheney (and many of his colleagues) consciously started a gruesome war in Iraq which has caused countless innocent children and civilians to perish under an atrocious pain.

If 1) were true, it would certainly have been moral for any member of the American Left to try to liquidate him.

Or what about economically Conservative politicians whose decisions cause countless children in the third world to starve and perish?

What about American Republican politicians who cause poor children to die because they don’t receive a sufficient healthcare?

Or what about immoral CEOs whose decisions can predictably  lead many of their employees to commit suicide (as it occurred in the enterprise of my father)?

You see, all terrorist groups around the world (both secular and religious) use such a logic for justifying the use of “lethal” violence. I’ve absolutely no doubt that our society would very soon become a hopeless hell if 1) were to be adopted by a sufficiently large number of individuals.

Violence and the early Christians.

There were many people causing countless innocent lives to pass away in Judah and Israel at the time of Christ. The Zealots were preaching armed resistance against the misdeeds of the Roman occupants. 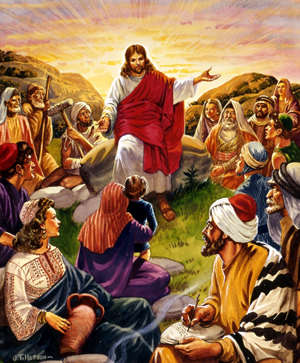 Yet, Jesus wasn’t one of them and consistently rejected the use of  violence against anyone. Following His example, the early Christians were horrified at the Roman custom to kill disabled children but they never murdered the perpetrators. They tried to change the societal mentalities underlying those cruel customs in a non-violent fashion.

Since RD is a fiery defender of Biblical inerrancy (Correction: RD is a Catholic basing himself on the Catechism of the Church of Rom for such matters), I want to quote verses which should put an end to any discussion:

“Let everyone be subject to the governing authorities, for there is no authority except that which God has established. The authorities that exist have been established by God. 2 Consequently, whoever rebels against the authority is rebelling against what God has instituted, and those who do so will bring judgment on themselves. 3 For rulers hold no terror for those who do right, but for those who do wrong. Do you want to be free from fear of the one in authority? Then do what is right and you will be commended. 4 For the one in authority is God’s servant for your good. But if you do wrong, be afraid, for rulers do not bear the sword for no reason. They are God’s servants, agents of wrath to bring punishment on the wrongdoer. 5 Therefore, it is necessary to submit to the authorities, not only because of possible punishment but also as a matter of conscience.”

The culture war and the roots of the problem

I would go farther than that and affirm that wanting to bring about laws forbidding abortion isn’t a solution at all. It is like a doctor prescribing pain killers to a patient while completely ignoring the cancer devouring his cells.

It is the numerous societal, social, psychological and economical factors that push women to choose to abort which need to be changed.

If we lived in a really compassionate and egalitarian society where sex, love and commitment always form an unbreakable trinity, abortion would be almost entirely limited to cases where the health of the female is seriously threatened.

The danger of sanctioning the use of terror

I have nothing at all against RD and neither hate nor despise him. But what he wrote here is undoubtedly egregious and I just couldn’t not react to that even though I feel no personal enmity towards him.

Being a Continental European (Germanic Frenchman), I ignore what the consequences in America might be. But if he were a French or German citizen having written that, he would now be (at the very least) closely watched by the French or German intelligence agencies and most likely condemned to prison for “incitement to violent acts.”

EVEN IF he did not call anyone to directly do that, it is undeniable he has unwittingly provided a justification for violent actions against physicians and nurses carrying out abortions. And mentally unstable people could very well take him extremely seriously.

I’d advise him (and any other “Christian Righter” reading this) to become much more cautious in their writings and other assertions in the public sphere.

Of course, my hope is that it is their whole mentality which will change, following what I’ve outlined here.

Note: RD posted a strongly spirited answer here. He correctly pointed up mistakes I did concerning him being American, Evangelical and Conservative.